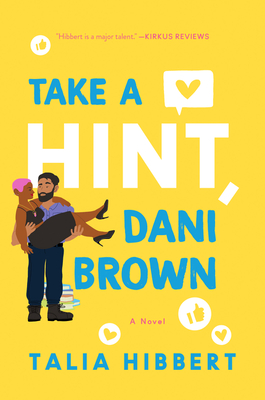 Take a Hint, Dani Brown by Talia Hibbert
Add to Your Goodreads
Buy it on Amazon

Talia Hibbert returns with another charming romantic comedy about a young woman who agrees to fake date her friend after a video of him “rescuing” her from their office building goes viral...Danika Brown knows what she wants: professional success, academic renown, and an occasional roll in the hay to relieve all that career-driven tension. But romance? Been there, done that, burned the T-shirt. Romantic partners, whatever their gender, are a distraction at best and a drain at worst. So Dani asks the universe for the perfect friend-with-benefits—someone who knows the score and knows their way around the bedroom. When brooding security guard Zafir Ansari rescues Dani from a workplace fire drill gone wrong, it’s an obvious sign: PhD student Dani and ex-rugby player Zaf are destined to sleep together. But before she can explain that fact, a video of the heroic rescue goes viral. Now half the internet is shipping #DrRugbae—and Zaf is begging Dani to play along. Turns out, his sports charity for kids could really use the publicity. Lying to help children? Who on earth would refuse? Dani’s plan is simple: fake a relationship in public, seduce Zaf behind the scenes. The trouble is, grumpy Zaf’s secretly a hopeless romantic—and he’s determined to corrupt Dani’s stone-cold realism. Before long, he’s tackling her fears into the dirt. But the former sports star has issues of his own, and the walls around his heart are as thick as his... um, thighs. Suddenly, the easy lay Dani dreamed of is more complex than her thesis. Has her wish backfired? Is her focus being tested? Or is the universe just waiting for her to take a hint?
*A special thank you to the publisher for this review copy.*

If I had only a small number of words to describe Take a Hint, Dani Brown—I would say it was uproariously funny, realistically romantic, and warm like a hug from a toddler or a fresh cookie out of the oven.

I’m not typically one for “cinnamon roll” heroes. I have nothing against them. I just like my romance difficult and dramatic, but I find “soft” romance has its place in my otherwise preferred emotionally heavy romance library.

I won’t get into much about the details of the story. I think the blurb does a good enough job of that. But I will talk about what I enjoyed. I know a lot of readers don’t find the value in indecisive or emotionally unavailable heroines—or those that can’t seem to find steady ground to stand on when it comes to emotions. I would have said something of the same years ago—but as someone not fully comfortable with emotional displays of affection, or sometimes even the private ones, I can understand it. I’m still learning that, so there’s absolutely room for fictional characters to do the same.

Love is tricky. It’s not as cut and dry as most of us try to make it. I think the best kind is the kind of love you have to work for. That's where Dani was. Hurt from some past relationship and internally wanting to fix it, but instead of doing so, dealt with it by avoiding it. There’s nothing wrong with that. When things don’t look like we expect, some of us avoid it. Fictional or otherwise.

I appreciated the author’s handling of Dani’s character. She was at times insufferable but writing her that way kept her rooted in reality, at least for me. I think if things continued to go so “perfectly” there would be no room for the character arc, which we know is essential in storytelling. But I very much appreciated that the couple didn’t spend a lot of time making us fall head over heels over the idea of them only to fall out repeatedly over stupid things. Considering Dani’s character, their “fallout” was perfectly suitable. It didn’t need to be totally reasonable.

Zaf, on the other hand, was almost perfect, but not too perfect. He had his flaws, but like Danika, he grew throughout the story. I loved the peeks of his culture, which I thought was handled delicately.

I rather enjoyed this couple. I thought the way they stumbled around the crush that honestly started their story was heartwarming. I laughed out loud a bit—which if anyone knows me knows is a monumental feat. Are there flaws? Sure, but I think that speaks to the characters' intended flaws and not at all a reflection of the writer herself.

The book's charm thoroughly entranced me. It was a treat for my eyes. It's worth the hype.