The Break Up Plan By Tia Kelly: Breakup Plan, Bih Where? 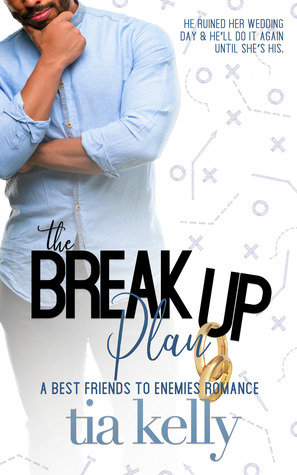 A man without a plan is a shell without purpose.Which is why when I sat down nine years ago and put pen to paper, mapping out a ten-year plan, I meant business. Everything that could set me up for a lifetime of joy had to go down on the list, and every day, I worked my ass off to fulfill it.Open my own sports agency. Check.Earn first million by my thirtieth birthday. I did that a week before I turned twenty-six.Negotiate the most lucrative contract in Major League history. Did that, too. Then went and broke my own record. (Thanks, big bro!)I could go on, but this isn’t about bragging. It’s me admitting that in the midst of drafting something that helps shape and mold much of my success, I still made a costly mistake.One day I realized all those entries with corresponding checkmarks are pointless if I don’t factor into the equation the most important goal of all. Avery.Perhaps way back then I wasn’t ready to see how much my best friend of fifteen years deserved that number one spot in my life. Maybe I was blind, since the whole “settle down and get married” scenario wasn’t my thing. But now that I’m aware of the role I need her to fill in my life, there’s no such thing as letting go until I can convince her to be mine.Her being about to marry someone else does make winning her heart a little bit dicey. But if there’s anything you should know about me, it’s that I always play to win. And losing Avery is nonnegotiable.

The “break up plan,” part of this book is as elusive to me as it was before I started reading the book as it is now that I’ve finished it. The synopsis and that little enticing paragraph on the front gave me an impression of something I never got.

What I expected to be a tale of a man dead set on snatching the woman that was meant to be his from the arms of a man that didn’t deserve her was actually a disconnected story that lacked the depth and emotion I expected it to have.

When I think friends to lovers or friends to enemies stories, I expect intense emotions. Shifts in relationships should be dramatic, at least in my lowly opinion.

There was some “fight” in the story but something was missing from it that I can’t quite put my finger on.

Something was missing in the story that I can’t specifically name—though I could pinpoint some areas where things remained unsolved or unexplained which is problematic for a story where the characters have known each other for so long.

I was wholly pulled in from page one. I could tell right away that Kelly’s writing style is/was the kind that I like. It was straightforward and did not dally. But once I settled into about half of the book things started to get a little muddled.

Things stopped making sense for me. I couldn’t quite get a handle on my feelings for Avery and Drew’s relationship professional or otherwise. It started with the loosely declared breakup plan—which was more of a passerby, “You’ve got something there idea,” as opposed to an actual plan which would have been something to see.

I would have been completely enthused by a Dwayne Wayne Whitley style “baby please,” wedding crash moment, but what I got was a relationship that benefited from a breakup that I saw coming from a mile away.

Don’t get me wrong it’s not a half bad book, it just lacked a certain something. Like when you’re making something and you go in for the taste test (All good cooks taste test their food) and you feel like something is missing but you can’t figure out if it’s pepper or salt. That’s what this was like. All the makings of a good book just lacking something to take it over the edge. It felt incomplete and that’s unfortunate.