New Year, New We by Katrina Jackson ARC Review: Can I Have a Glass or Water or Somethin'? 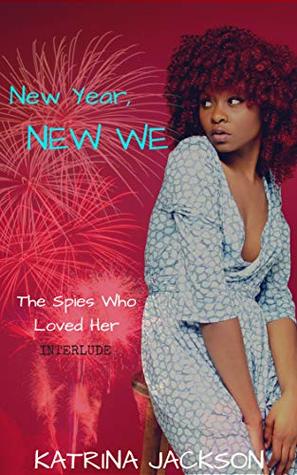 New Year, New We (The Spies Who Loved Her) Interlude by Katrina Jackson
Add to Your Goodreads
Buy it on Amazon

Kierra has been in the honeymoon period with Monica and Lane for a few months. But as the year comes to a close she is confronted with questions she can't answer alone, because she's not an island anymore. Is this temporary? Do they love her as much as she loves them? Is there room for one more? In this New Year's interlude, check in on this polyamorous triad as they make their way carefully from lust to love. With still a lot of lust. New Year, New We is an interlude in The Spies Who Loved Her series. These erotic romantic suspense stories are about sexy secret agents and the civilians who bring them to their knees.
New Year's Eve is a night of figurative and orgasmic fireworks for Monica, Lane, and Kierra—as per their usual.
Kierra, Monica, and Lane have found a nice groove in their new spot. At least two of them have. Kierra has all she’s ever wanted. A good job, a high-paying promotion on the horizon and all the orgasms from two of her favorite people she could ever want.

But she’s beginning to wonder if this all, too good to be true? Do Monica and Lane really love her, or will these now constant sexcapades tire them of her?

Kierra, we, sure enough, hope not.

My faves are back and are up to full-on shenanigans.

A mission that calls for them to be just as they are allows for them to explore sides of themselves and emotions they didn’t realize they had.

While this book is almost full on erotica (okay, Kat, heard you!) it does allow for the reader to see a more in-depth emotional side to the characters. Lane has always come off as the more caring of the three while Monica is the hard shell.

In New Year, New We, we see Monica as a woman with feelings, even if they are deeply attached to Kierra’s. We also get to see Kierra as less confident than she normally is which humanizes and softens her image in a good way. Don’t trip, she’s still the same sassy sexy kitten she’s been in books one and two.

I liked the way this story explored the depths of their relationship and what it really is outside of the sex though of course, it’s hot enough to singe your fingers.

The spy stuff is exciting as usual, it’s actually allowed me to enjoy this type of story more. Though it acts as a catalyst for the true stars of the story, it’s just as exciting as the characters whom I hope I’ve convinced you to love by now.

Not to mention we’re introduced to two new characters and I can say with each new book I get more excited for where this series is going.

Kat brought her usual game—sarcastic but effective humor and sass. Sex that will make you blush, and a story that is both not lacking in emotion or excitement. It’s always a win-with with Jackson and as long as she keeps writing, I’ll keep supporting.

Email ThisBlogThis!Share to TwitterShare to FacebookShare to Pinterest
Labels: black author, black literature, katrina jackson, the spies who loved her