Snowflake (An 'Afterwards' Novel) by Nia Forrester: This is What Love Is 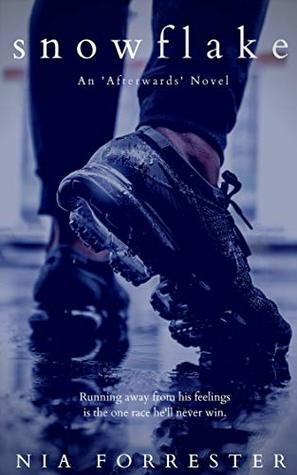 Snowflake (An 'Afterwards' Novel) by Nia Forrester
Add to Your Goodreads
Buy it on Amazon
Running away from his feelings is the one race he'll never win ... A star athlete and Olympic prospect, Kal Carter is bound for greatness. Everyone says it, only he's not sure he entirely believes it. Because he’s lost something he can’t replace, and most days feels like he’s holding up the sky; and doing it all on his own. To maintain focus, he never lets anyone close except in the most superficial ways and he’s become very good at it. Until a long, cold week when the solitary girl next-door who never speaks, smiles or makes eye-contact barges into his life and seems poised to upend the whole doggone thing.

Review
5 out of 5 stars
Sometimes I read a book, and sometimes it reads me. They don't always have to be self-help books, but some books, even fiction books have the ability to see you. I feel seen.

Snowflake caught me by surprise. I wasn't sure about this one as I got about halfway through but as the story progressed, and the characters grew (you know figuratively), I was totally entranced and I am warm inside, like an ooey-gooey brownie or something.

Asha is shy. She hides behind her locs and her gentle demeanor. She doesn't socialize or go out unless it's to class and back to the apartment where she lives across from the school's star athlete--and resident playboy.

Kaleem whose name will now always bring a reminder of good feelings--is a runner--hence the cover of this book, which I love by the way. It's actually what convinced me to pick it up. He's a ladies man but he's a respectable ladies man. He gets his rocks off and he moves on, but he's always respectful.

He noticed Asha, but not for any spectacular reason. But when they find themselves stranded on campus--alone, with a snowstorm on the horizon. A chance stranding brings about one of my now favorite fictional relationships.

I don't even know how to talk about this, though I would say I've written quite a bit before I had the nerve to say that. So, I'm trying.

I was afraid for Asha, afraid of her character and what it would mean for the story. She was painfully shy, and I thought her character would get lost in Kaleem's presence--and the very idea of it almost turned me off.

But as the story progressed, I found out how alike we are. For a long time (settle in for a short story time) I was afraid and shy. Afraid of nothing and everything all at once. Shy to any social situation that would require I show parts of myself I wasn't prepared to show, parts I thought would be judged and have been judged. But the core of me was so much stronger and bolder than that--and I'm still growing into that person and so is Asha. She was just a woman with a not-so-great upbringing that is just trying to figure out where she fits, coming from a place where she never fit. Hell, Asha is me, and how could I ever think I didn't understand her? She is me and I am her.

Kaleem, I feel like even the inside of my head where I'm pulling this from is sighing in satisfaction. I loved his character. Kaleem is suffering from the absence of his father--and the relationship he is trying to maintain with his mother.

He's a runner and an all around good guy. He just doesn't know that yet. Nothing like seeing a man becoming a man, even if it is fictional.

The relationship that grows between Asha and Kaleem is the thing of storybooks, not the kind with princesses and princes that kiss you awake and make your life better. Okay, maybe that's a bad analogy--because a kiss from the right man can wake you up. At least that's what I hear/believe. This is not a fairytale. Things get hard, feelings get hurt, and none of it is easy--but it's worth it, reading this book was worth it. So worth it.

Guys, this story is just so good, I can't even articulate it in a way that I want to.

This story really touched me--and I already know when I compile a list of authors and stories that stood out to me this year, this will be on it, right at the top.

I don't want to say too much because I want to gush, and rant and rave--but I would never spoil this for you guys. Please read this book. The relationships are so realistic and worth reading. The romance is a slow burn, slow, and I loved every delicious, delirium-inducing second. Every character, every moment built up this story right to where it needs to be, and I am so, so pleased and so in love with this piece of literature and how it made me feel.

Thank you for this, Nia. Thank you for writing about girls like me and giving them their well-deserved happy ending.