Whirlwind Love by A' Sunnshine 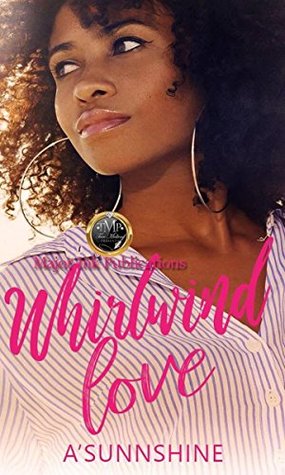 Whirlwind Love by A' Sunnshine
Add to Your Goodreads
Buy it on Amazon
Blurb:
Twenty-seven-year-old, Pharaoh Sullivan is a jack of all trades in every way imaginable. Although, he’s a loving, caring husband that’s also a great provider, Mr. Sullivan just has one tiny flaw. Twenty-four-year-old Trinidad Sullivan is everything a wife should be, and some. Pharaoh is the only man she has ever loved, but what’s a girl to do when she’s fed up with her husband’s foolery. When enough is enough, Trini takes matters into her own hands and start to dish out the same thing that her sweet Pharaoh is doing to her. Being torn between wanting out of her marriage or sticking it out, Trini is lost on what to do. When the storm begins to brew a whirlwind of deceit, lies, and betrayal, will Trini and Pharaoh come out together or a part?

Review + Rating
2.5-3 out of 5 stars
I have to admit any expectations I may have had for any of the books I've picked up this last week, have dropped to nothing.

My expectations for this latest read were none. I saw a cover I liked, and a blurb that I breezed over, that seemed decent enough.

My biggest gripe is the writing. It's not that great, considering the flow between the point of views were a little too sharp at times to be considered seamless.

When books are split between points of view, it needs to flow seamlessly for easy reading.

Additionally, the characters were kind of assholes. They start off fighting, and they end off fighting. It was like a bad episode of love and hip hop--the streets edition.

I don't have a lot of strong feelings towards this novel either way. BUT, boy did that cover get me? Lookin' like a cute contemporary, when it houses nothing but ratchet characters doing ratchet things. This is urban fiction, don't be fooled.

The ending is a cliff-hanger, so expect more shenanigans at some point in the future.
at May 17, 2018