Half & Half by Grey 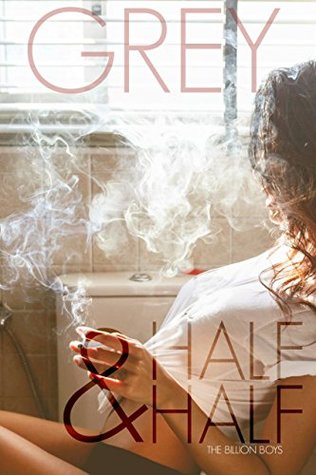 Half & Half by Grey Huffington
Add to Your Goodreads
Buy it on Amazon
Blurb:


I was open for him.
All night & all day.
Just like the coffee shop I’d met him at that day luck was on my side.

It was one cup of coffee.
My last five dollars.
And a sign of good faith.

Who’d ever known the man I given my last to would be Levee Billion, prominent figure and one of Huffington Mill’s most eligible bachelors. Did I mention he was filthy fxcking rich?

Just before he slid into his foreign whip, he’d left my mind in a frenzy and my body on fire. One wink and a thank you note with his number attached.

Of course I was in need.
I had been since the day I smelled his obnoxious cologne.
Witnessed his intoxicating smile.
Been blessed with his lingering presence.

I’d become addicted.
His absence was vexatious.
Even, now, the thought of our differences keeping us apart had me strung out and stressed out.

As I've said on previous occasions, I really don't like to harp on grammatical errors, in books. BUT, I couldn't possibly ignore the numerous errors, and inconsistencies presented in this novel.

So, I've never read a Grey novel before--and to be honest, I thought it was Erotica. Erotica is not necessarily my cup of tea. However, in my continuous attempt to support black literature, feelings and preconceived notions, be damned--I picked it up.

I am in a state of confusion.

So many unrealistic situations, illogical explanations, misspellings--and inconsistencies, made Jazmen, an unhappy reader.

Heartleigh is having the time of her life--and not in a good way. She's down to her last seven dollars, itching for a marijuana fix, in need of a job--everything is dangling on the precipice of failure and destruction.

She takes herself to a coffee shop and stumbles across Levee Billion, who somehow has left his wallet at home--when Heartleigh offers her last dime to help him get his caffeine fix.

He sends her his contact info via air drop with the promise of being there, ONLY, if she explicitly needs him.

He was something else. Social awkwardness, and a penance for not talking--made it difficult to connect with his character.

He was hardened, and unfamiliar with how to work, in and around social situations that perplexed him, giving off the sense of autism in a way.

While it did make it hard to connect with him, it wasn't solely because he barely spoke--but if a character doesn't speak there should be a sense of the character in their back story and actions.

There was a lack of that.

Being a kid that had it rough socially just wasn't enough to get me in.

Levee, was just, something.

Between him and Heartleigh, I'm not sure which character concerned me more.

Heartleigh was completely and utterly unsure of herself, and her path in life--and Levee was just as lost.

I would say in a sense, they helped find one another--but I don't see how they helped each other singularly.

The insta-love in this one was rushed, unbelievable and unconvincing.

Levee is so hard to like and although Heartleigh is supposed to be this strong black chick--I wasn't buying into it.

There was a lack of emotional depth that kept me from being pulled in.

On top of all of that, the structure, the grammar, and the inconsistencies I mentioned previously, was the nail in the proverbial coffin.

"She apologized for my mistake. So fucking perfect. Too dedicated to my thoughts of her, I neglected to pay attention to where I was going and collided with the brazen beauty. My large frame flung her into the wall of the narrow hallway. The collision shoved me in the same direction, but I used the wall behind us to weaken the reaction."

What laws of gravity are we using here? I've never heard of one person bumping into the other without a third party and being propelled into the same direction.

Not physically possible, and a forced and unrealistic interaction.

"Her staring back as I gazed into her memorizing rounds." (I won't even dwell on how the word rounds, used to describe eyes is just odd.)

Emotions reflected on the skin of a character?

There were moments where complete sections and/or paragraphs were repeated for dramatic effect.

Words were misspelled and mis-used, and I can honestly see where there was a lack of good editing--or any editing at all.

My well-being was always top prior to her, and that shit made me all squishy inside. (Priority, belongs here.)

These examples may seem trivial or petty, when taken outside of the context of the novel--but they were numerous--and cumbersome to the story itself.

To be honest, even with proper editing, this story wouldn't have worked, at least not for me. It's just not good writing.

It's not to say I can't see what the author was trying to do, the execution was just off. Way off.

I'm surprised by the rave reviews, because this book was bad--blatantly bad, in ways it didn't need to be.

Supremely, and my expectations were none.

I did decide to try another series of her books, and you can see how I felt about those in my next review.

Did the author redeem herself? Find out!