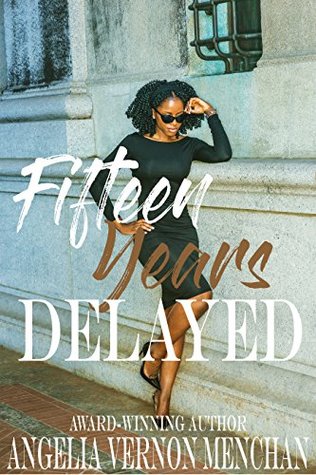 Fifteen Years Delayed by Angelia Vernon Menchan
Add to Your Goodreads
Buy it on Amazon
Blurb:
Fifteen Years Delayed is a love story. James Broadnax is sentenced to twenty-five years at age twenty-two, leaving behind his first love, Crea Flournoy. For fifteen years there are no visits or communication, twelve years of James being incarcerated and three years living in another city... If you need lots of drama and angst, this isn’t for you. Fifteen Years Delayed is about adults who have been through... and are ready to love and be loved... no gaming. James returns to the scene of the crime, so to speak and Crea is still there... Fifteen Years Delayed is their story... after reuniting. It is not a story of his incarceration nor is it a story of Crea’s life when they were apart. It’s a love story, not just about them but the people in their lives... it is about what happens when lovers are reunited after fifteen years of delay.

Review + Rating
2 out of 5 stars
If your romance relies on the throes of passion, and its depth is in the amount of times the characters can have meaningless sex, it's not romance at all. It's erotica with a story line.

James was sentenced to 25 years at the ripe age of 22, leaving behind his one true love, Crea.

Now they're all grown up, and it's fifteen years later.

Crea is a principal at a school. She's educated and has her stuff together.

James has also pursued education in his absence, and currently helps his sister run their shared grocery store.

But his plans for his life are much bigger--and they include Crea.

Crea puts up a weak baby fight at the idea of getting back with James--although it's obvious in the clenched thighs and dirty thoughts she's far from done with him.

One demand is all it takes to drench her panties and to completely weaken her resolve.

And it's not long; and I mean not long at all--before they're fully back in the swing of things.

And by swing of things, I mean he's swinging his peen at her at any given opportunity and it's written in aggravating detail--from the wide-open legs, to the levitating off the bed. Yup, I said levitating.

To be honest, there were far too many sex scenes and few too many scenes of substance to consider this a true romance.

But that wasn't even this novel's biggest issue. The biggest and most glaring issue was the structure.

This novel was disconnected, discombobulated, and just an honest mess.

Point of views were scattered between characters, as they appeared in the story, and made the read even more unstructured than it already was.

Chapters or sections, rather, did not mesh or flow well--as they were often indecipherable from another.

The book was not put together well--and felt more like a bunch of mini stories and moments grouped together--distinguishable by the same characters showing up.

The sex scenes were a few too many and lacked emotion and even sensuality.

The romance between the characters felt lackluster at best--bonded together by the character's inability to keep their hands off one another.

The conflict was forced at every turn, and over explained down to the most minute, unnecessary detail.

This book made me cringe and I'm just glad to be done with it, to be quite honest.

While I wouldn't recommend this read, I'm sure there are a group of readers who will enjoy venturing through the maze of this second-chance romance.