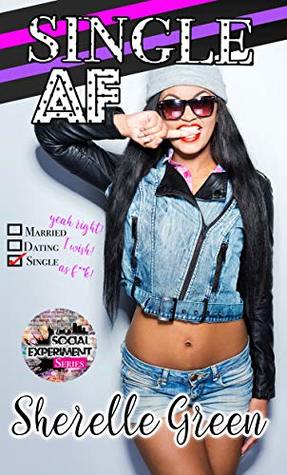 Single AF Green
Add to Your Goodreads
Buy it on Amazon

SINGLE: Unmarried or not involved in a stable relationship. MEEKA  The pure term ‘being single’ makes me want to gag every time I hear it. worst part is you’re constantly reminded of your status. Like, do you really think I can forget I’m single? I’ve dated more Mr. Wrong’s than I can count, and now, the network I work for wants me to share my -up dating history with the world. To make matters more humiliating, my arch nemesis — Mr. Missed Opportunity — has a seat to my walking, talking mistakes.    TONE To say working with Meeka on this assignment to go badly, would be an understatement. We’ve never gotten along, and I have a good reason for staying clear. Everything about her screams extra! So when our network needs me to assist her with her project, I’m intrigued to hear what her exes have to say about their past relationship. Maybe I’ll get insight into her character or validate my assumptions. Or unbeknownst I might just with this loud, crazy woman more than I ever thought I would. They say don’t mix business with pleasure. Funny, I never liked that rule.
Single AF had a promising start that quickly turned into a lackluster though amusing middle and later ending.

Single AF stars Meeka, Tone and their supporting cast of friends. Meeka is crazy. At least that’s how she comes off. Mostly, she’s just an insecure woman camouflaging her relationship and abandonment issues. She does so with overzealous and mostly amusing random acts of insanity.

Meeka was a fun character, and the story was equally fun—to a certain degree.

The romance between her and Tone was less fun. While I enjoyed the fun-like banter between the two; once they got serious, I wasn’t so sold on their partnership.

It felt insta-lovey, because though they bantered, and there was a build-up to their pairing—it felt forced. There wasn’t much emotional connection. It felt surface and things just kind of happened between them, expectedly and in a quick moving manner.

Their lovemaking and romance were silly. I thought even the serious part wasn’t serious enough. This book is mostly humorous with little seriousness—which is fine, but I personally would have liked equal parts of both. There was an immaturity to Meeka’s character I didn’t care for. But, that’s me.

Readers looking for a good laugh will enjoy Single AF; especially if you are single AF. It’s not lacking in relatable content.

I’m not totally in love, but I’m far from disappointed. I’m standing in the middle of the road on this one.

If you like your romance novels fun and light with a little angst—this is the perfect read for you.
at April 10, 2019