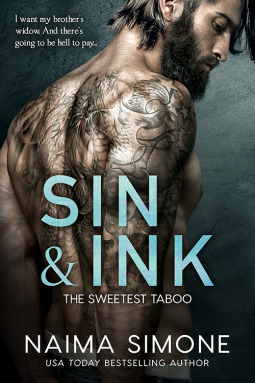 There's sin, and then there's literally going-straight-to-hell sin... in lust with my dead brother's wife pretty much guarantees that one day I'll be the devil's bitch. But Eden Gordon works with me, so it's getting harder and harder to stay away. I promised my family—and him—I would, though.My days as an MMA champion are behind me. But whenever I see her, with those wicked curves and soft mouth created for dirty deeds, it's a fight to just maintain my distance. "Hard Knox" becomes more than just the name of my tattoo shop. However, surrendering to the forbidden might be worth losing everything...
I'm trying to loosen the hold the top of my shirt seems to have on my throat or the haze of lust that seemed to cover this book like a looming rain cloud ready to burst. If emotional was enough of a word to describe this book; I would stop there. This book was intense. As much as the angst threatened to drown me in its overwhelming presence--I don't think I could properly articulate it.

Knox craves his sister-in-law like a drug addict craves his/her next hit. It's wrong and it’s not good for him, but it doesn't stop from seizing him and taking him by the throat every time Eden is in the room.

His MMA fighting days are behind him, but what he no longer fights physically, like men in the ring--he fights mentally: like his guilt and the love he harbors for his brother’s widow.

Knox’s mental tug of war results in a novel heavy angst and blame--that later cocoons into love and forgiveness.

Obviously, romance is the most important part of this novel, but the emotional depth of the novel is what kept me reading. If you knew me at all; you’d know a novel that pulls at my emotions satisfies my Scorpion heart like a balm to a burn.

Novels that don't stray from, but dive headfirst into the emotional side of its plot and its characters--are among my favorite types of books. Books filled with angst are among some of my second favorite types.

This book is heavy handed on both. While I adored the book for this; it did feel a bit overwhelming at times. It could have been my eagerness for a conclusion. Or it could have been my eagerness to get past the angst in an effort to get to the juicy parts; that had me feeling this way. But, it all works for this book. Be prepared for a slow burn that chafes like a fresh sunburn.

However, the writing is brilliant. The were so perfectly written; they stirred incandescent images I felt like I could see and touch.

I wanted to tuck some of them away for later; for use in my own writing. The pacing is perfect. Simone did everything right with Sin and Ink--and she's gained a fan because of it. She did what needed to be done.

Stroking my emotions and being a stellar writer is my Achilles heel. It's what brings me to my proverbial knees. It's the books I look for when everything else feels wrong.

This book is not perfect, but as far as the things I look for: emotion, depth, and good writing; it's damn close.

The backgrounds are solid as a rock--giving the story a depth that couldn’t have been achieved by lazy writing or happenstance. This novel was planned and written with a precision not many authors can achieve. Naima is a force to be reckoned with. I'm honestly both surprised and not; that I haven't heard of her before this. But, with stories like these, I’m sure I’ll hear more about her; coming from my own mouth most likely.

However, if her books are always this angst-y, I'll probably enjoy them with trepidation--fear of the emotional pulling: choosing to feast on them like a bag of chips on cheat day.

Sin and Ink a solid winner: with great writing, solid characters--and sex scenes that will have you reaching for a glass of water. It will have you coming back to this author for more.