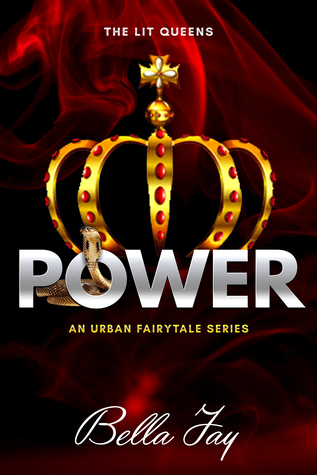 Power (An Urban Fairytale Series, #2) by Bella Jay
Add to Your Goodreads
Buy it on Amazon

What if Aladdin was an above average thief in the hood, Princess Jasmine was the daughter of a crime boss, and Jafar was still the snake he always was? Welcome to Power.For The Sultan Empire (TSE) nothing is more important than being and staying on top. The business and family come first.Jolee Cullen was instilled this all her life and though she accepted it, all she wanted at her age was a chance at a regular life. But as the daughter of crime boss - Samuel Cullen -, and the heir to his throne, a regular life is never something she'd have. She was born with all the power she could want... but she wanted freedom. And once she meets Amare, she'll have to decide between him and her empire.Amare Thomas, a skilled thief, has spent the better part of his life trying to stay afloat for himself and his younger brother. When the consequences of a bad decision lands him on TSE's payroll, he has no idea of the turn his life will take. Or that he'll fall for his boss' off limits daughter. For Amare having power is the furthest thing from his mind until he gets a taste.Jareem Blackwood, the current right-hand man to Samuel, wants what he believes he deserves, and that's to be Samuel's successor. Jareem already has it all, but he doesn't think he has enough. His pockets are deep but sometimes it's not about the money, loyalty, or respect. It's about the power. To him, you can never have enough and nothing or no one was going to stop him from getting the throne.The Urban Fairytale Series is a series of standalone fairytale retellings and each book can be read as its own entity. Power, the second book in the series, is inspired by the classic fairytale, Aladdin.
Review
4 out of 5 stars
Bella Jay, let me get up out my seat and applaud you, sis, because you did that.
Y’all know I’m like a broken record when it comes to my complaints about urban fiction, but I’m nothing if consistent.
Urban fiction just doesn’t do it for me anymore but when Ms. Jay approached me with her urban fiction retelling of Aladdin, I couldn’t help but say yes, and I’m glad I did.
Amare is all rags and no riches. His life is a mess but he’s holding all together, by being a thieving “street rat.” Taking care of himself and his brother hasn’t been easy and it’s not about to get easier.
Jolee is in training to take over her father’s empire someday, and though she doesn’t want it, she wants her freedom even more. Her father basically has her locked in the proverbial castle like a disgruntled princess waiting for her Prince Charming—though no one will ever be good enough for her.
Jareem is our Jafar, calculated and salivating for the throne.
All of their lives will intertwine, lies will be told, lives will be threatened, love will blossom—and the reader will experience a whole new world, in this street fancy Aladdin influenced novel.
This book was clever. I am impressed. While this book is not Aladdin to a tee, the references were perfectly weaved throughout the story in such a way that I smiled every time I picked up on it,
In an ingenious way, Jay re-wrote Aladdin in a street relatable manner. Though it’s core is the Urban Fiction I’ve grown used to, it is glaringly unique and fun in a way I didn’t anticipate.
I actually stayed up well into the night (I’m writing this review after 2:30 am) because I didn’t want to stop reading and this is a rarity.
Without giving too much of the actual story away, this novel is well-written, perfectly paced, and does justice to the movie it was influenced by.
The characters were solid and fleshed out, the novel’s length was appropriate and fitting. No parts were dull or lagging and I thoroughly had a good time with this one.
It was sexy and funny in places I wasn’t expecting and I actually squealed a bit in some parts and that’s usually reserved for strictly romance titles.
A solid novel with its stuff together.
I look forward to more from this author—sooner rather than later.
at January 14, 2019