Stipulations (Moore to Love Series, Book One) by Celeste Granger 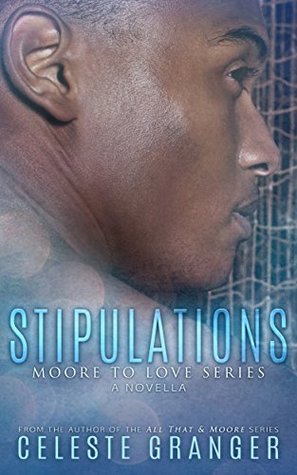 Stipulations (Moore to Love Series, Book One) by Celeste Granger
Add to Your Goodreads
Buy it on Amazon
Blurb:
Sloan Moore, a trilingual translator, and communications specialist proffered her expert services throughout the Southern region, bridging the language gap for business and individuals alike. The one language that Sloan found difficulty speaking was the language of true love. There had been men who entered her life; however, their exit was swift as Sloan struggled to make a real connection with them. Sloan was fiercely independent and unapologetic about the conditions she thought were important to a relationship. She had an amazing career, good friends and a family that loved her. She wasn’t looking for anyone to fix or save her. Titus Phillips, millionaire entrepreneur, and philanthropist have a lot in common. He too was unapologetic about his success, spending his days running a profitable business and his nights doing what any handsome, successful bachelor would do. Titus lived life to the fullest, taking no prisoners in his quest to live every day as though it were his last. Titus balanced his high-octane lifestyle with philanthropic endeavors; giving back whenever he could. A chance encounter brought Sloan into Titus’ orbit. The magnetism between the two shifted the earth on its access. Sloan was Titus’ to have, only if he could handle the stipulations.
Review + Rating
2.5 out of 5 stars
The 90-day rule.

Okay, this came along in the story before it even made sense; leaving me with a bad taste in my mouth every single time it was mentioned, which was often.

Sloan decides to wait 90 days to have sex with her newly found, boo, Titus, a la Think Like a Man, Act Like A Woman.

This seems to be the focal point for this quick-moving insta-love relationship, along with absolutely cringe-worthy sex when it gets down to it, see: love juices and love passage.

Sloan meets Titus at a speed dating event, and quite frankly he rubbed me the wrong way right off the bat.

He’s supposed to be this really sure of himself, cocky, but interesting kind of guy. But he just comes off as an asshole. I believe that’s due to lack of development and backstory but I’ll get back to that.

The implication is that he’s used to getting what he wants—which I am fine with, HOWEVER, make him likable while we’re doing it.

He’s not very likable, not initially.

Sloan is supposed to be this business-oriented woman, with her usual together, aside from the lacking love life.

In all honesty, her character contradicts her description. She’s not confident. She’s slightly immature, lacks understanding and is not a good example of a solid character.

None of this is to say I hated this book or its characters, it just lacked depth and structure which failed this novel.

Everything happens so quickly, without background, without merit, full telling, and it took something away from the enjoyment of it.

But the sex scenes...took me right out.

It read like a historical romance from back when your grandma was reading it with heaving bosoms and love tunnels.

Look here, do you boo boo. When it comes to creativity and being inventive in novels I am all in. Here for it.

But the way the sex was described had me giggling in complete delusion. I was trying to make light of the fact that I was completely disturbed. There are just certain terms that will always rub me the wrong way. I am not alone. I rounded friends to talk about it, and before I could fully voice an opinion. They too were cringing—called Sloan a juice box actually.

Some quotes: (Reader description is advised.)

“...Reaching to the depths of her love passage, Titus’ manhood pushed against her clit causing spasms that generated a flood of love juice from Sloan’ chamber...”

“...the slap of his male fortitude against her wet puss...”

“...Titus roared against her and inside her, spilling his life juice into her womb.”

I can’t talk about this anymore. I feel like I’m reading my parent's description of sexy times and I’d much rather not.

Aside from my discomfort, which luckily only occurred a handful of times—this book lacked depth and development. The conflict of the novel was trivial. You don’t really get to know the characters because you don’t get enough backstory to really engage and invest time.

It’s not the worse but it wasn’t the best.