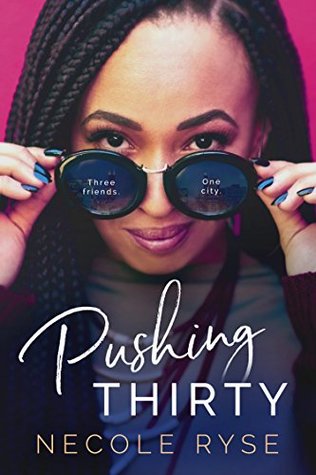 Pushing Thirty by Necole Ryse
Add to Your Goodreads
Buy it on Amazon
Blurb:
29-year-old viral TV blogger Zaahira Ramsey has it all, except peace. She’s built a fortress of protection around her heart as big as her coily hair. But when Chris Samuels enters her life, ready to unpack everything she’s been carrying, will she put up a fight? Or will the scrappy know-it-all fold under the pressure? Camille Downing has lived most of her 29 years in the shadows of other people. As a top-notch executive assistant, she makes the impossible possible while taking none of the credit. But when she meets flashy and outgoing Jemel Jones, he makes her question why she’s been constantly selling herself short. Can she let go? Or will he push her too far out of her comfort zone? Terry Baldwin can’t even. With three kids under her belt at 29, and a husband who acts like child number four, she’s slowly losing her mind. With her family falling apart at the seams, Terry decides to get a job. Can she be a full-time employee and mother? Or will the weight of adulting finally send her over the edge?
Review + Rating
3.5 out of 5 stars
*A special thanks to the author for this review copy.*
Girlfriends meet Sex and The City in this relatable, and realistic tale of three women on the cusp of turning thirty-trying to figure out this thing called life.

I'm newly in my dirty thirties. I would tell you how old I am, but then I'd have to kill you.

Without giving my version of a recap of the blurb to this novel as I'm known to do, I will get right down to it.

Zaahira was immediately the hardest to like. Though I admired her celebrity YouTube star status, in a lot of scenes--she doesn't come off very likable. There was just something off about her behavior towards Chris (I'm jumping ahead a little) that I found both disheartening and inexplicable. She did eventually make amends (in my eyes) and I was glad to see it. I was almost tempted to completely, well partially write her off.

I did however like that she was this black girl nerd--who wasn't really outgoing but built up this huge following online, just being her blerd self. As an introvert, I liked that she found a way to still build up a name for herself while not being as outgoing as one would expect someone like her to be. It gave me hope, it gives me hope.

Camille was probably the most relatable--mostly because she was in a work situation that I found closely reflected my own. Not because I'm a boss chick in the making or anything--(at least not yet) but in her dealings with the overzealous, shine stealing colonizer she dealt with on a daily basis.

She was making a name for herself but scared to find herself in the actual limelight, unsure of whether or not she deserved or could handle it.

She wasn't looking for love but found it in a man that was both attractive--and confidently pursuant.

Terry. Terry is probably the most relatable to a lot of young mothers. Terry is struggling to be a mother of three before thirty. Having recently had a baby--her body is in a place it shouldn't be at her age, and not only that she has no life outside of being a mother and wife--and it's not as satisfying as it once was. I felt for Terry because I know what it's like to just want to figure things out, all the while feeling like no one gets it, or you.

The guys in this book were pretty tame but very likable--and admirable.

Chris was definitely my favorite. He was  kind and patient--the kid was Jesus. He was turning cheeks, fixing relationships, and wooing everyone he came across--men and women alike.

He was ridiculously patient with Zaahira who often acted out of emotion and not heart. He was sweet and just the kind of guy that Zaahira needed, hell I need.

Jemel is the kind of guy you often find in romance novels. He's a womanizer of sorts, he's attractive, and he's very confidant. What sets him apart is his determination to get to know Camille, which completely counteracts with his known womanizer status.

Terry's husband was adorable at first, but he did start to piss me off. His lack of presence and lack of understanding made him hard to like for a while, until he redeemed himself--which if he didn't, I would have had some hands on the ready for him.

I know I'm going on a bit about the characters but their journey and development is the biggest part of this novel and quite frankly the most enjoyable part of it.

The journey into adult hood is tough, but it's also amazing and Ryse captures all of these painstaking details with accuracy, humor, and sass.

Told in alternating points of view, readers will be taken in by romance, the life--the setbacks, the set ups, the glow ups, the frustrations, and the laughs--you'll be taken on a ride. It's a slow descent but once it takes off, it's a ride you'll get to the end of, and want more.

Ryse has a dry sense of humor, that is perfectly captured in the voices of her characters. It's unintentionally humorous--while maintaining it's mature seriousness.

It's a perfect blend, of some of our favorite things--and it cements Ryse as an author to watch.

A great read for those of us that don't have a single f'in clue what we're doing in life, because you're not alone. Not at all.
at August 08, 2018