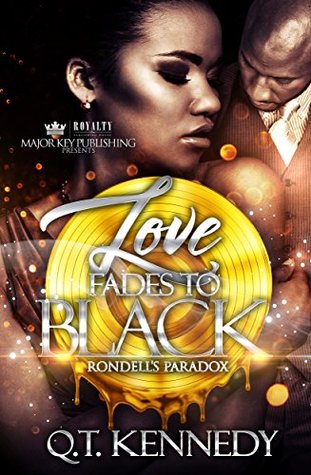 Love Fades to Black (Rondell's Paradox) by Q.T. Kennedy
Add to Your Goodreads
Buy it on Amazon
Blurb:
Young, brilliant, and sexy, Rondell Williams is a marketing agent on a meteoric rise, starting an artist management agency, Paradox Entertainment, which causes dissension between him and his soon-to-be-ex-girlfriend, India. As a newly available bachelor, he is thrust into the throes of a passionate partnership with his beautiful, Caucasian coworker, Victoria, which causes him great professional pains and personal tensions. He simultaneously begins an affair with his former trainee, Carmelita, a spicy Brazilian senorita and Victoria’s best friend. The plot thickens with an attempt on Rondell’s life. Is this attempt due to his hookups with Victoria and Carmelita, or is there some other diabolical scheme unfurling? Will he choose to bed them both, or will he end up with Victoria, the modelesque American girl next door or the sassy, sensual Brazilian bombshell Carmelita? And what about Phoebe, the sexually adventurous recording artist who has her mind set on experiencing Rondell’s erotic power? Can he balance his need for love and his passion for music or will his world come crashing down before he can build his empire?

Review + Rating
2 out of 5 stars
It took me more than a week to read this book and that's saying a lot.

No matter at what point in the day, no matter the mood--this book was hard to read. It wasn't because of grammar or anything like that--it simply was a hard to read the book--due to the subject matter, and the constant irritation it caused me.

This book was grossly unrealistic and rode the waves of stereotypes like a prize-winning stallion.

Rondell is at the top of his game with his job, he's with the love of his life--his music production/management business is taking off--things couldn't be better. That is until his girlfriend, India starts acting differently. She needs space and time--things he's not willing to give.

In steps the spicy Latina, the clueless white girl, and the hands-y soul-singer.

All causing confusion during a "difficult," time for Rondell.

Look, let's be honest, yes, he just lost his girlfriend but his emotions are about as genuine as a 3 dollar bill. I just was not buying it. Maybe, I haven't been hurt enough, or maybe I just don't get it. I don't know. *shrugs shoulders* I just didn't care for his emotional outbursts; his reactions, his happiness--none of it.

But to be honest, Rondell wasn't even the straw that broke the proverbial camel's back for me.

It was the fact, even if unknowingly or unintentionally--the book perpetuated stereotypes like it was its day job.

Let me explain, briefly, as briefly as I can.

The girlfriend is African American, one can assume from her description. But in comparison to the other women in the story, was loud, vocal, irrational, just everything people think black women are.

This is further reiterated when the main character becomes interested or starts dealing with the white girl, Victoria.

Victoria is about as exciting as watching paint dry. She had no substance and her story was just...meh.

As we're introduced to her, she's malleable, soft-spoken, angelic (Victoria's secret angel, angelic to be exact--the author's description, not my own.) She's clueless to black culture and lingo--often providing us with the air-headed, white girl, I don't understand. But she somehow manages to be down, and grace us with her, "good money," at every unnecessary aggravating turn.

And there's also the spicy latina--who did everything in Spanish. She ate in Spanish--showcasing her cultural presence, with hard-to-pronounce meals. She danced in Spanish, sensually and latina-y. She also spoke in Spanish at every turn. Hell, she had sex in Spanish, with the papis and what not. It made its point and then some. She was vivacious, spicy--and Spanish--as much as she could possibly be.

While I got the point--it was too heavy-handed to be enjoyable.

Without being too overly critical, this book got on my last nerves. It had some high points like the father and mother--whom I found to be quite hilarious. However, they couldn't save an already sinking ship.

There is potential here--because the author did give us a story with an unexpected ending--but it's not executed well. It's executed rather stereotypically and over the top-y.

I'm not entirely pleased with this one, and I'm just going to leave it at that. I'm no expert. Who are me?

If you like urban fiction with a whole lot of drama--and over the top romance, quadrangle--because a triangle is just not fitting--this book is perfect for you.