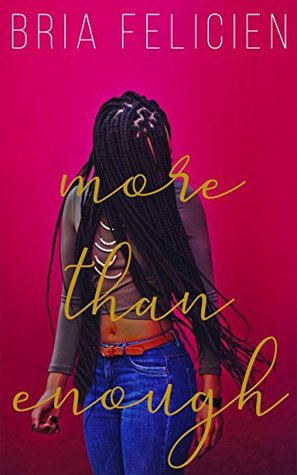 More Than Enough (Post Grad, #1)
By:Bria Felicien
Published: May 3rd, 2018
Add to Your Goodreads
Buy it on Amazon
Blurb:
All Jamila wants to do is figure out this “adulthood” thing. Step 1: Find a new job. With his second career about to begin, TJ is ready to settle down. Step 1: Start dating again. When TJ and Jamila meet, they don't know what to do with each other. Other than complicate everything.


I've followed Bria for a bit--I think. Not quite sure how long, but I wasn't always a Twitter person--so her being a writer--wasn't something I noticed, because I just wasn't looking.

As I graduated (because sis, I stepped up), from my mostly YA blog--and moved on here to this blog. I started noticing things.

AND, when Bria posted just a small snippet from her book, I knew I had to snatch it up.

I was like Jamila is me, and I am her.

Imagine being 32 and still feeling like you haven't quite figured life out? Because honey, that's me. The character is in her twenties, but yeah, the feelings are the same for both the character and me.

Anyway, the snippet grabbed me, and then the cover choke-holded me. Yes. Holded.

So, when that beauty downloaded I couldn't resist--and started it right away.

It was like being among friends--just jonesing and talking.

Jamila has no idea what she's doing with her life. Okay, she has a semblance of an idea of what she wants to do, but executing said ideas, yeah, she's struggling with that. While her best friend, Kennedy--kind of has all the answers. So, Jamila enlists Kennedy's help in finding a job--everyday she'll apply to a job or several jobs until something sticks.

In the process of bettering her life she finds herself in the company of T.J, old classmate--and bully. He is everything she doesn't want--but will wind up being everything she needs.

Jamila was and is very much like me, as it pertains to where she is in her life at the moment--questioning her place, and wanting more than what she has, knowing she's capable of more.

These similarities allowed me to connect with both Jamila's character and the story itself.

My one critique or observation was Jamila's awkwardness. I kept saying to myself, Sis, gonna’ do something and run this man off.

But, you know what, after getting through the end of it I admired that T.J. liked her despite all her flaws--which is the way we all want to be loved, in spite of--even because of.

Their story was a unique one in the way it happened, and in the way, it was executed. Of course, there was a conflict, but they handled everything, like two adults. I was cool with that, couples have broken up for much less, and less trivial things. Jamila was more of an adult than she gave herself credit for.

I think all in all ( I say this far to much. I'm going to find another way to end my reviews. Lordt.), this is a decent story--with a painstankingly familiar story--one with room for growth, and one that I'll be following.