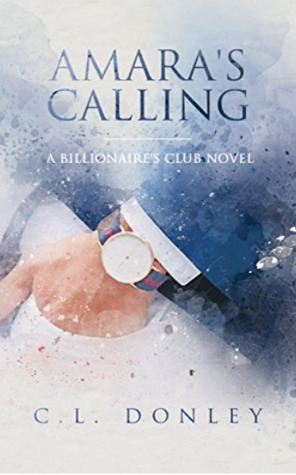 Amara's Calling by C.L. Donley
Add to Your Goodreads
Buy it on Amazon
Blurb:
Amara is a young idealistic 20-something who goes to work for her crush and personal hero, Grayson Davis, a 30's Mark Zuckerberg type and CEO of an internet startup called Webster, the story world's equivalent of Facebook. Being a young African American woman in a predominantly white world, Amara is reticent to believe that she's actually caught the attention of the notorious playboy billionaire. When she discovers that she has, but not for the purposes of happily ever after, she decides to strike a deal with him: one million for the privilege of being his mistress. It seemed like a modern day win/win, but neither anticipates the emotional challenges their contract will bring. Will they inadvertently fall in love, or will the ghosts of their tragic pasts keep them apart?


Review + Rating
Three out of Five Stars
I took some time with this review. I needed to gather my thoughts, because my feelings are conflicted.

I wasn't exactly prepared for the Fifty Shades of Grey-esque, contractual romance, that I wound up getting.

The author used Amara's voice to present obvious and realistic issues faced by black women in the workplace, and in general--and it was done in a almost flippant way--not so much in your face, but more so, recognize I'm here, and I probably have something to say.

I wasn't sure how to feel.

Grayson, the billionaire in our story--hmm,he was something. I was stuck between hating him, pitying him, and liking him.

I didn't care for his sizing up of Amara, boiling down to her most inane blackness.

I pitied the fact that he seemed stuck in his adolescent years, mentally.

But I liked him when he was at his best, giving Amara needed attention, and being man enough to big up, Amara,when she was at her most vulnerable.

Yet despite these things, my feelings remain conflicted about the book. I, by no means hated this book, but love would be too strong of a word.

There was something about their relationship that sat funny with my spirit. I was cool with the interracial aspect of it, but a bit taken aback by the superficial things that came between them.

They seemed to just not get each other, understandably--but I was unsure if they were even going to try.

Now that I've completed it, I'm not sure if they'll ever understand each other. But, I think love has made it possible for them to co-exist despite their differences, and still have a love that can be withstand the test of time--because if they were a real couple, I do believe the harsh realities of their differences may come between them.

As a whole,the story was funny at times, and frustrating at others--but sometimes romance reads evoke those kinds of feelings out of you. It's not necessarily a bad thing.

I'd be interested to read more of this author's work, I believe that her works are only going to get better.