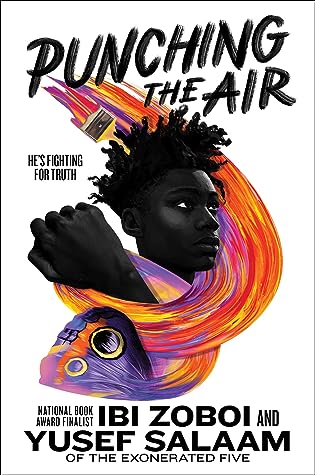 The story that I thoughtwas my lifedidn’t start on the dayI was bornAmal Shahid has always been an artist and a poet. But even in a diverse art school, he’s seen as disruptive and unmotivated by a biased system. Then one fateful night, an altercation in a gentrifying neighbourhood escalates into tragedy. “Boys just being boys” turns out to be true only when those boys are white. The story that I thinkwill be my lifestarts todaySuddenly, at just sixteen years old, Amal’s bright future is upended: he is convicted of a crime he didn’t commit and sent to prison. Despair and rage almost sink him until he turns to the refuge of his words, his art. This never should have been his story. But can he change it?

On page 77, there's a line that says, "Bail money is invisible handcuffs," and if that's true, Black anger is mine. It's a quiet/loud part of me I lug around weighed down by its seemingly present less presence. Wondering when my Blackness will get me into trouble, I didn't create.

When I finished this book, I just sat still, staring at the cursor contemplating how to summarize what the book is about and how it made me feel. Whatever I say here will be inadequate, but here's me trying.

I can honestly say the Exonerated Five was just a story, an angering story I knew little about. Then many, many years later, Ava DuVernay made a film about them. Then the story became real, and the anger that I mentioned at the beginning became something I could taste. It was like eating something sour that lingered and lingered.

This collaboration is a light into an otherwise darkened, unvisited place-- a story that tells the truth of the disenfranchisement of young Black men. It also paints a picture of the injustices of the judicial system that doesn't give Black people the same justice it has given others. So many Black boys and men wind up in prison. The actual number would make my stomach want to retreat in on itself.

This story shows the power of words and thoughts and how they can either turn into hope or despair. This book was both, and it straddled the fence expertly to prove its many points.

Amal came to life in short bursts of powerful prose. Every line tugged on my heart and yanked my face forward so I didn't miss a single line.

Punching the Air is one of those books that read you while you're reading it. I am moved to a desire for action. I want to do more than read the book and move on.  This book reminds me of why I read in the first place and why it matters so much to me. It reminds me why words matter so much period.

The words between the two minuscule pieces of paper that hold the book together cannot contain the power within it. Hard-hitting, wise and bold, Punching the Air is a novel you won't soon forget.

Thank you Ibi and Yusef for this story and these words.