Cover Revel and Excerpt for The Bad in Each Other by Tasha L. Harrison 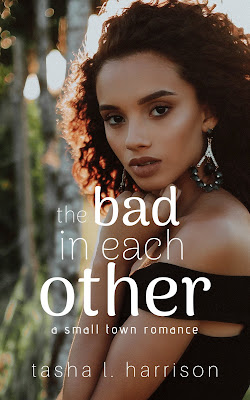 Blurb
Sous Chef, Birdie Malone do anything to disprove the rumor "she doesn't play well with others."
Even if it means taking a job as a line cook at a local meat and three while building a following on her YouTube channel and trying to be the superhero her five-year-old daughter Amara believes her to be. Competing in her hometown’s yearly foodie competition would definitely help. If she wins, she will finally get the position and recognition she's been desperate to receive. Even if Saxon Turner, world renowned chef and ruiner of her life is one . No one ever needs to speak about what happened between them. She can keep her secrets.
Chef Saxon Turner is in danger of having his foodie travel show canceled after he gets caught in a dark room with the Governor's daughter. Luckily, a friend steps in and offers him an opportunity to judge a foodie competition and a chance to until it all blows over. Maybe this time he will shed the bad boy image he's carried with him through most of his life.
Or at least he thought it would be until he saw that one is Birdie Malone.
It's been six years since he’s seen Birdie and he’s more than surprised to find the petite, brown-skinned, talented chef competing in a small town food competition when she should a kitchen of her own. When they met, the passion between them was hotter than a pit barbecue fire and the way he left things between them when she got kicked out of culinary school is chief among his regrets. Now that she’s back in his life, he can only hope that she will trust and respect him again.
wants to win the money to start her own catering business and ignore the fact that Saxon has unexpectedly become an unwanted distraction. But the passion, intensity, and creativity he inspires in her can’t . Will she be able to keep him out of her bed and her head in the game?

Excerpt:
There are lots of things I imagined myself saying when I finally came face to face with Saxon Turner again.
You broke my heart in ways that I never knew it could break, and I’ll never forgive you for that.
The time I spent with you has ruined me for all men.
How are you alive? I gave my mama your hair to put a root on you. You should be dead.
How could you never look for me?
Did you ever love me?
If you did, how could you just walk away?
I’m forever changed by our time together. How are you the same?
I wanted to say some or all of those things, but all that came out was sputtering words full of anger tinged disbelief. Anger that grew to a white-hot ember. Immense. Consuming. God, I haven’t been this angry since…
Since the day he left me.
I couldn’t think about this now. Not now.
Chef Ransom moved from table to table, examining everyone’s knife cuts while I tried to get myself together. I may have found the intestinal fortitude to stomach being in the same room with Saxon, but after he brushed by me on the way back to the judge’s table…
Yea, I need to tap into strength I wasn’t even sure I ever had to make my way through this.
The smell of himlike and baked apples. Less of a smell and more like two things that made me feel at home. And what the fuck did it say about me I felt at home with a man who literally doesn’t have a home? That made his money traveling the world in some hedonistic version of Eat, Pray, Love. A man with no roots was a man who could . Especially not with my daughter.
Our daughter.
Chef Ranson stepped up to my prep station with his mouth set in a grim line. “Chef Malone,” he murmured.
“Chef,” I answered greeting.
“These cuts are excellent, but that’s expected of a working line cook. I suspect you get a log of practice at this.”
It wasn’t exactly a dig, but I felt the bite in his comment. I didn’t know what he knew about me, but that comment made me feel like what he wasn’t anything good. At the very least, he heard about my reputation for being a loud voice of descent in the kitchen, and that was enough.
“Good work,” Chef Ransom said, but his tone was almost a bit begrudging. Like he didn’t want to give me even that tiniest bit of praise.
“Thank you, Chef.”
“And I assume whatever… issue you had that made you run from this room is now under control?” He looked at me, piercing dark eyes meeting mine to convey some unspoken intent.
“Yes, chef.” I dropped my gaze to the colorful little piles of veg on my station. “It was just nerves. I’ll be fine.”
“Good,” he said, then rapped on the stainless steel table before moving on the next station.
I stared at the veg, fixated on the uniformity of the slices. This wasn’t culinary arts school or the kitchen, but keeping my skills sharp was important.
“Students! Please help competitors store their mise en place so we can prepare for the next challenge! Contestants, you can take a fifteen-minute break, but you must remain in the building or in the designated smoking area.”
I stepped back from my station and looked around the room. My gaze locked on Saxon’s almost instantly. He tipped his head toward the door and raised his eyebrows, an obvious request to step outside and talk.
I shook my head and mouthed the words fuck you again because really, fuck him. No, I wouldn’t go out in the hall with him to talk. The time for talking passed six years ago when I found myself in Airport, a duffle bag at my feet, waiting, or a man who had already boarded a plane to the other side of the world six hours earlier. If I’d received a phone call twenty-four hours, hell, seventy-two hours later, to explain why he left me outside of the terminal with nothing but a broken promise.
In my peripheral vision, I saw Saxon stand up. Weak ass fool that I am, I looked up at him again because I couldn’t help looking at him. My eyes loved the sight of him even though I hated him with every fiber of my being. He didn’t say a word, but his bright blue eyes pleaded with me.
God… it was still hard to tell those blue eyes no.
at February 21, 2020