The Voice In My Head by Dana L. Davis Release Day Review: Prepare to Laugh and Cry 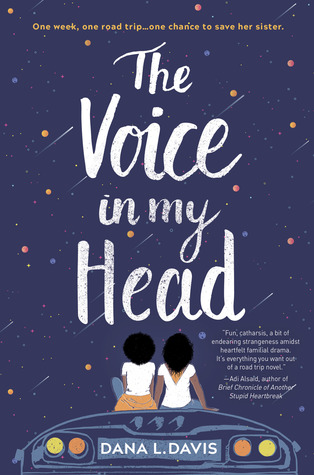 From the author of Tiffany Sly Lives Here Now comes an unforgettable novel about facing the impossible, dealing with family chaos—and making sense of everything you are.For Indigo Phillips, life has always been and her identical twin—Violet. The perfectly dressed, gentle, popular sister. But now Violet is terminally ill and, in a few hours, plans to die on her own terms via medically assisted suicide. Even though she and Violet have drifted apart lately, Indigo doesn’t know how to face life without the only person who really understands her. Until suddenly she hears a mysterious voice claiming to be God, insisting that if she takes Violet to a remote rock formation in the Arizona desert, her sister will live.Indigo is sure she’s losing it. But Violet agrees to go—if their dysfunctional family accompanies them on their trek from Seattle to Arizona. Indigo can barely be in the same zip code as her distant mother and controlling big sister, much less keep the peace on a road trip. Speaking her mind is the only way she can deal. But between facing senseless mishaps and strange lodgings, and meeting even stranger folks along the way, Indigo will learn things about those she thought she knew too well. When a sequence of wrenching secrets detonates, Indigo must figure out how to come to terms with her sister, her familyand the voice in her head.
Hmm. I’m not sure how to feel about this one.

Indigo and Violet are twin sisters. And one of them is dying. Indigo can’t imagine life
without her twin, so she attempts suicide, but her attempt is unsuccessful.

A broken arm, a concussion and one voice of God later, had Indigo dragging her
terminally ill sister on a trip to the Wave. The voice in her head tells her if she gets
her sister to the wave, she’ll live.

Determination and a mustard seed of faith take the family on a barely planned trip
to the Wave. The Wave is only accessible by lottery.

Though everyone thinks Indigo’s crazy, they allow the voice of God that she hears to guide them.

As a believer, a Jesus follower or what have you, this plot thrilled me. A God-guided YA?
Count me in.

The voice is a loose guide, not using an all mighty, all-knowing lead; but using humor—
the voice was the perfect companion. The voice is not all at holier than thou, though the
reader should know it has authority. Laughs, and humor wrap around the sadness that
encompasses this book; as the reader awaits the death, that’s sure to come.

The family dynamic is solid. It’s not perfect at all, but it’s very realistic. Trouble will
follow when you’re dealing with a terminal illness. There’s bound to be strain and strife as
emotions are constantly running high.

The buildup is the star of the story. I don’t know about anyone else, but my hope was high
throughout the entire story. I wanted Violet to live. So bad.

I couldn’t wrap my head around her dying; especially by her own hand.

The book brought to light the argument on medically assisted (by choice) suicide. I don’t
have a view to share but I understood both sides. The book does a fairly decent though
vague job of allowing the reader to get an understanding of this death.

There’s not a lot of growth that happens outside of Indigo’s character but you get some
heartfelt family moments, much like an episode of would end.

Though it’s well-written and very engaging, I would have liked to spend more time getting a back story on Violet. But, the story tries to wrap up family issues, which it does towards the end.

I found the story relatable, but I was less than pleased with the ending. It’s an ode to real
life, but I wanted more.

Davis is a good writer and I hope she continues to tackle black characters this way.
I wasn’t totally in love with this one but I appreciated this hope-filled, realistic tale.

Bring the tissues if you’re an emotional reader, you may shed a tear or two.