No Holds Barred (In the Heart of a Valentine, Book, #1) by Stephanie Nicole Norris 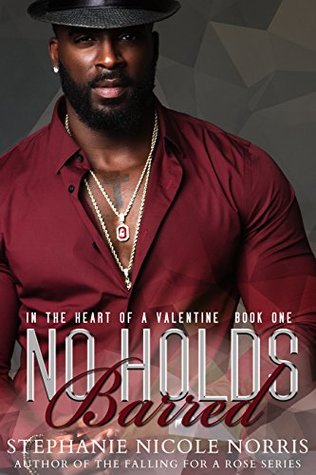 No Holds Barred Stephanie Nicole Norris
Add to Your Goodreads
Buy it on Amazon
Blurb:
Love was no longer on the menu for Camilla Augustina. After her fiancé calls off the wedding not once but twice, Camilla's had enough. In a brazen move, she takes a new position in the windy city of Chicago; leaving her parents, friends, and ex in a bittersweet goodbye. Adapting to her new surroundings isn't easy but as Camilla settles in a chance encounter with an infamous playboy throws her off balance and rattles her world. She hadn't expected to be drawn so meticulously to another but denying the magnetism that lures her is a futile fight. As President of VFC Energy, a fortune 500 company, Hunter Valentine is at the top of his game. The renowned bachelor holds no secrets about his risqué rendezvous, and his allegiance is saved for family only. However, when Hunter spots Camilla Augustina, dining alone at the breakfast hut in his building, he can't explain the adulation that runs through his core and shakes his entire world. Lust never weakened him like this, and the inclination of love at first site was silly. But when Hunter decides to prove the sudden rapture is unreal, he may find himself enamored by love. *Each book in this series can be read as a standalone*
Review + Rating
5 out of 5 stars
Let me tell you something. I’ve been reading for a very long time, and I think I’m having more fun reading now, in my thirties than I have in a long time.

No Holds Barred allowed me to enjoy the types of characters I never knew existed but so desperately wanted and needed. The importance of diversity is never lost upon me, every single time I pick up one of these books and whisper to myself, they get it. They got it and they’ve given it to me.

Hunter Valentine is what I would imagine I want my husband to be. Intelligent, business-oriented, successful, caring and fine as all get out.

Hunter strolled his tall sexy black behind onto the pages and I damn near fell out. He was intense and melinated and I rejoiced. I’m still rejoicing.

What I enjoyed most about Hunter and about his character was the fact that he was the complete opposite of the portrait society wants to paint of the black man.

He’s not in jail or selling narcotics. He has his ish together and he’s so well put together. We all want him. Hell, you’ll want him.

His character was strong and domineering. He was very assertive in a not so chauvinistic Christian Grey-esque way.

He paid attention. He was attentive. He was sexual—Y'all was he sexual—and he was raised well.

When he and his brothers donned aprons to serve the women at the table, I became ooze and slithered out of my chair. I wish. I want.

Camilla was a journalist with a bright smile and an open heart. She was a perfect fit for Hunter—and though she was pretty much the MC I can’t stop focusing on Hunter, and the black love story Stephanie created for her readers with him at the helm.

I really want to take a second to one thank Stephanie for giving me a story that made it hard to sit still and tired out my fanning hand—but also for creating a cast of characters that were black and not stereotyped.

It may not seem like a big deal, but it is when there is such a lack of such characters and I still have to hunt them down.

This story is well-written and downright steamy. I might have burned a finger or two under the scrutiny and heat of Hunter's eyes, and the chemistry between Hunter and Camilla.

The chemistry between Hunter and Camilla is this novel’s strongest suit. There isn’t a strong emotional feel to it, but between the chemistry, and Hunter’s character, I didn’t much miss it.

The author maintained my interest and gave me a romance to ship.

Well done, and I look forward to trying some of the other books in this series.

My favorite quotes:
“You smell good enough to eat,” she said.
“Let me know if you want a taste, and I’ll be more than happy to oblige.”

“Believe it or not, Angel, it only takes being without you for a few minutes to want you there again.”

Oh, and did I mention he gives her one of those frequently used nicknames, and it did NOT get on my nerves. It flowed right into the story and fit the mood every time. That’s usually not the case. So, thanks, Stephanie for changing my mind about pet names from wealthy/well-to-do men in books.
at August 12, 2018