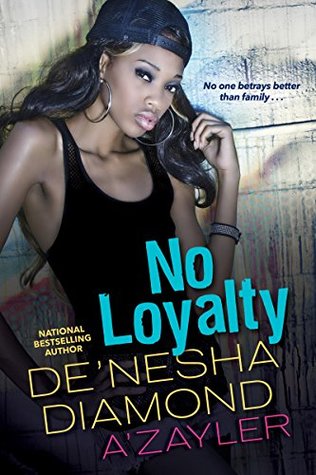 No Loyalty by De'Nesha Diamond & A'Zayler
Add to Your Goodreads
Buy it on Amazon
Blurb:
She's watching. She's planning. She's past done waiting. Klaudya Ramsey is out for revenge on her own mother. Nichelle seduced Klaudya's wealthy, disloyal husband, had her innocent daughter jailed—and stole her life. Now Klaudya plays on her mom's insatiable greed and her husband's gullibility to take them down hard. But a secret Klaudya never saw coming could turn her vengeful dream into an inescapable nightmare . . . TEARS OF BLOODA'ZAYLER Their bond is unbreakable. They always have each other's backs—though that's the only thing identical twins Aiden and Kayden Lattimore have in common. So when hard-driving achiever Aiden accidentally gets in major-league trouble, Kayden does his brother's jail time for him. Too bad Aiden is taking care of Kayden's beautiful wife all too well. And now Kayden is about to teach Aiden a lesson in betrayal these brothers may not survive .