Trouble (It's Complicated, #1) by Ann Christopher 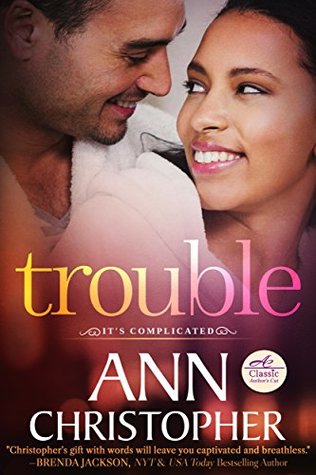 Trouble (It's Complicated, #1) by Ann Christopher
Grab a copy on: Amazon
Add it to your: Goodreads

Genre: Contemporary, Romance
Published: August 26th, 2015
Blurb:Defense attorney Mike Baldwin has never lost a trial. He knows he can trust his razor-sharp instincts, and defendants who are straight up with him walk free. But those instincts always seem to fail him in his personal life. He's been burned before, very badly, yet when, at a party, he meets his younger brother Sean's date--law student Dara Williams--the chemistry is undeniable. Dara, though strong-willed and whip-smart, closely guards a painful past; the only time she was intimate with a man, her trust was betrayed. She doesn't want another man, and that includes Sean. As Dara begins an internship at Mike's firm, the two deny their growing attraction until their smoldering desires just can't be contained. But Mike prides himself on his honor and hates the thought of betraying his brother, and Dara continually wonders if she can truly put her trust in Mike. Can love heal the deepest wounds of the heart?

It's often difficult to like books with hard-headed, irrational characters. When it comes to romance, the expectation is that two characters will get together, they might argue, but it will end in the anticipated HEA (happily ever after.) Fear in love will often have characters acting irrationally, leaving behind a very frustrated reader.

This book is probably going to do that you, and while I won't argue the level of frustration a single person can take, I have to say the pay off on this one, was well worth it.

Nothing in life comes easy, and neither should love.

Dara is a law student, who has a happenstance meeting with law firm, owner, Mike at a party.

Their chance encounter sets off a ripple effect, that neither of them will ever recover from.

What I really liked about this book was despite the frustrating back and forth, (which I for one, find to be a form of delicious torture) there was always a lingering sense of hope--hope that things would turn out the way they were intended to be.

I think it's easy to overlook that when all you want to do is smash their heads together, and have them, "just do it already."

But I like my love hard, and difficult and slow-building--because once we get to that precipice, that climax of togetherness, it's so much better, and that much more fulfilling.

I also liked how well developed the characters were. Sure, they had the hots for each other, but the backstory seemed both realistic and fitting to the story and the progression of the relationships and the overall plot.

The novel wasn't perfect, it almost scared me off using the word titties at the beginning. I mean, clutch my pearls, who says that, anymore?

But the novel was a depiction of perfectly imperfect love, the kind of love that had some kinks in, but the kind you could have hope for.

Mike's feelings towards Dara were intense and almost Christian Grey like in nature.--but, it felt genuine, even if it might rub some of you the wrong way.

I don't mind to see that kind of intensity in romance, towards romance--as long as it's not abusive.

There's a lot you can complain about, but I found the book enjoyable, intensity, frustration and all  A solid read with decent characters.